Just 7 months from now, your US attendees will need to present a REAL ID or another acceptable form of identification (like a passport) to board their flights.

If attendees, speakers and other members of the meeting team do not update to a REAL ID by October 1, 2020 or have an acceptable alternate form of ID, they will be turned away at the airport. The time to start preparing is now.

What is a REAL ID?

If your license is REAL ID-compliant, there will be a star in the top right corner. Many drivers may not realize they already have one, since some states have been issuing them for a few years. Residents have until October 1 to obtain a compliant license.

Attendees without a REAL ID will need to show an alternative form of identification, such as a US passport or passport card. A full list can be found here.

Not on the Radar

An estimated 99 million Americans (39 percent) do not have any form of identification (e.g. REAL ID-compliant driver’s license, US passport, US military ID or an enhanced driver’s license) that will be accepted after October 1, said Shane Downey, vice president of government relations, on the Global Business Travel Association’s blog. The majority of Americans (57 percent) are unaware of the October 1 deadline.

A scan of Prevue’s Editorial Advisory Board members found that many already had preparations in place, or close. Doug Wheeler, principal, Summit Performance Group LLC, reports that his company has been posting information on social media and is planning direct mailings to clients. Stacey Sanchez, CMP, executive director, global events at Prime Global, said she plans to implement some of the U.S. Travel Association’s ‘messaging best practices’ in the communications plan. “We will be adding blurbs about the deadline on all event communications and on event web pages with links to the TSA and DHS web sites. It’s so important to bring awareness to your attendees ASAP.”

Download the Real-ID Toolkit for fact sheets, graphics, talking points and other resources.The CM Group has a program in place to notify all attendees; contact Courtney Richman Crichman@thecmgroup.com to learn more. 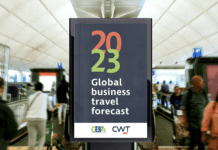 Masks Are Off on Airplanes