Puerto Rico is open for business—bring your appetite.

It’s not how the recipe usually goes but the chefs at Hecho en Casa managed to create a vegan version of mofongo, a time-honored dish in Puerto Rico that is usually decked out in meats and seafood, in addition to the stock-infused plantains that make it so hearty and delicious. We’ve been eating our way—vegan and non-vegan alike—across the cobblestone streets of Old San Juan with Marriott and Spoon Food Tours. At Cafe Don Ruiz, it was cafe con leche made with handpicked coffee from the mountains of Yauco and served with mallorca, a sweet roll that can be stuffed with cheese and other fillings and topped with powdered sugar; avocados stuffed with an array of local flavors at Stuffed Avocado; coquito, a coconut-based egg nog with coffee and rum at Caldera Cafe; and at Sr. Paleta, artisanal ice cream pops of passion fruit, guava, coconut and pineapple. A sunset cruise aboard The Legend, adds canapes, wine and cava to the mix. Ahhh. Good times.

Good food and good times are high on Marriott’s to-do list for the meeting- and convention-goers that visit the island. And they top this off with good accommodations and venue options, as we learned during a recent jaunt through the hotel company’s Puerto Rico properties.

Our time at the 233-room lifestyle hotel AC Hotel San Juan Condado was hallmarked by cocktails on the rooftop overlooking the ocean. A living wall and peripheral greenery accent bright and contemporary seating, while the surrounding urban ambiance reminds attendees they are in the heart of the action, particularly in the way of restaurants, attractions and night life. General Manager Reynaldo Rey Fernandez says that although the rooftop is a prime spot for cocktail receptions, a new interactive concept is also in the works. The biggest development, however, comes in response to the new DMO in town, Discover Puerto Rico, whose mission of “working together rather than against each other,” Fernandez says, has trickled into Marriott’s Puerto Rico portfolio as well. “Every property offers something different—we’re trying to build on that.”

“Every property offers something different—we’re trying to build on that.”

Something different was indeed on the agenda at the 503-room Sheraton Puerto Rico Hotel & Casino, overlooking the Puerto Rico Convention Center and new District Live!, set to debut next spring. The entertainment district will feature, among other things, a venue for 6,000, a disco, zip line and movie theatre. Attendees staying at the Sheraton have a good vantage point of the action from the 57,000-sf Sun Deck overlooking San Juan Bay and the convention center. And a new 170-room Marriott hotel will connect directly to the district. The Sheraton brand, meanwhile, is undergoing a large-scale revamp in its own right.

A special lunch at San Juan Marriott Resort & Stellaris Casino’s Gelato & Co. with General Manager Jose Gonzalez reveals the property’s playful side. In between spoonfuls of creamy pistachio and hazelnut perfection, Gonzalez says the 525-room resort’s La Vista Beachside Grill is transforming this December into Gingambo, serving locally inspired dishes including Puerto Rican beef soup. “We’re bringing the local flavor into the kitchen,” he says, and it’s clear we’re talking about much more than mofongo, though you’ll definitely want to arrange a mofongo team building session. “It’s the most popular team building experience across our properties.” 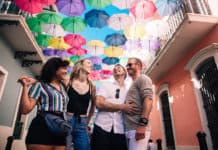