Dr. Scott Gottlieb, the former FDA commissioner and chairman of the Sail Safe Global Health & Wellness Council, recently shared his outlook on COVID-19 and its future impact on society as a whole, as well as on travel.

At the start of the virtual discussion—which was hosted by Norwegian Cruise Line, Oceania Cruises and Regent Seven Seas—Frank del Rio, president and CEO of Norwegian Cruise Line Holdings, announced that by mid-May his entire crew will be  boosted. “Society is inching its way back to normal,” said Del Rio.

Gottlieb noted that we are starting to see a decline in cases across the country and a rapid change in policy when it comes to government lifting things like masks requirements in places such as schools and public settings. He expects there to be an announcement from the administration by March 18 regarding new procedures.

“My expectation would be that they’re going to extend that [the mask mandate], but I think they’re going to wait until the whole country is green. Right now about 77 percent of the country is in that low prevalence range, but I think it’ll probably be the end of April before you start to see the whole country get to 10 cases per 100,000 people per day. All the modeling suggests that we’ll be there by the end of March.”

When it comes to masking, he noted that, “A lot of people want these mandates to be lifted; some people don’t. Some people feel safe in these environments wearing masks, but you can still afford yourself a high degree of safety through masking as an individual if you’re wearing a high-quality mask. I think we’ve gotten to the point in our society where if you’re the sole person wearing a mask on a plane, no one looks at you strangely anymore. Masks have become normalized. I think you’re still going to see a lot of people in environments where masks aren’t required still wearing masks because people feel more comfortable wearing masks now, especially when we get into the colder months.”

He also added that supply for therapeutics is increasing, and that by the time we’re in April, he expects they’ll be readily available. So, if you get diagnosed with COVID, and you want to access to this therapeutic or the monoclonal antibodies, you will have access to it.

Gottlieb noted that supply was short last winter because the therapeutics were new and we were in high peak season of COVID infection at that point. “We’ve never seen an infection infect 50 percent of the population in two months. That’s what happened with Omicron,” he added.

Finally, when it comes to quarantining and having to isolate, Gottlieb said that over time those requirements will be reduced and might become like the flu, where there’s an expectation that if you’re diagnosed, you stay home and avoid infecting other people. But it’s not going to be something that’s imposed by a public health ordinance. “I also think there will be less mandatory testing. So less people will be caught in an isolation or quarantine situation,” he added.

“I think this will become more like the flu, and we’ll deal with it that way,” Gottlieb said. “A lot of this is going to be expectations put on people, rather than rules put in place by governance.”

This article first appeared in our sister publication, Recommend.

COVID is Waning, But Don’t Relax Yet 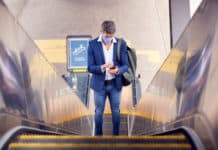