Let’s hope that you never have a boss like Meryl Streep in “The Devil Wears Prada,” but there is some valuable career advice for meeting planners to be found in this 2006 flick, based on a bestseller of the same name.

Handling Stressful Situations Only Gets Easier

The first piece of career advice for meeting planners: Consider difficult people to be your tutors, not your adversaries. When Andy (played by Anne Hathaway) starts her new job at the glamorous fashion magazine Runway, it’s immediately clear that she is going to have her hands full with her ice queen editor-in-chief Miranda and her jealous co-worker Emily. Even if it’s not your boss, meeting planners are guaranteed to meet similar personalities and over time develop strategies for dealing with them at every turn.

Whether it’s with a hotel salesperson who refuses your business or a supplier who doesn’t come through, find a way to bridge your disappointment or anger instead of burn that bridge. In the movie, despite her leaving on difficult terms, Andy manages never to lose it to the point where Miranda still gives her a positive recommendation.

In one scene in the movie, the magazine’s creative director and editor-in-chief are arguing over a spread in the magazine and the boss decides to cut the pages. That’s going to happen all the time when you come up with creative—but not necessary—ideas. They will be the first to go, often for financial reasons. But once in a while you will be able to effect change and the other times it’s important to realize the bottom line will always win out. 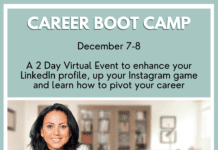 Moving Up the Corporate Ladder Need Career Advice? We Asked Prevue’s Advisory Board For Some