Of the many positives coming out of this week’s PCMA Convening Leaders in Austin, Texas: a tool to help planners find CSR projects in various cities—and to eventually quantify the amount of philanthropy conventions bring to cities. Known as Giving Good, the web site began with a great idea and an Innovation Grant from ASAE.

PCMA created a beta site, which is launched in early 2016 with 13 supporting destinations. Today it is fully functioning, with more than 30 destinations now featuring their community impact projects and links for further information. There’s information on the nonprofit organization, the months of the year help is needed, even the attire that attendees would need to wear to participate. A contact at the local CVB is dedicated to connecting planners with the organization should they be interested in booking a give-back event.

For example, in Anaheim, Calif., you will find everything from with Patriots and Paws, which provides veterans and members of the military and their families throughout Southern California with basic home furnishings, to the Orange County Food Bank, where attendees can sort donated food and check items for quality and safety.

Giving Good is a joint project of five associations, with DMAI, MPI and IAEE also joining PCMA and ASAE. At the opening press conference for Convening Leaders, Deborah Sexton, FASAE, president and CEO at PCMA, described the portal as a “win-win”—not just for the planners, but for the participating CVBs, who can track the overall impact of CSR programs done by meetings and conventions visiting their cities.

“Imagine being able to take this information right into the Mayor’s office and say, ‘Here’s what trade shows bring us in addition to tax dollars,'” she said. “There’s a lot that goes on that no one is aware of and we would like to be able to grow that awareness.” 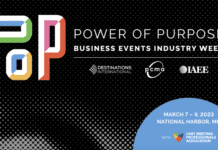