An authentic taste of Europe right here in North America. That’s exactly what Quebec City Business Destination—comprised of Quebec City Tourism – Meetings and Conventions and the Quebec City Convention Centre—offers meeting and incentive groups. Well, that and a treasure trove of modern and cultural venues and immersive experiences woven together by an ease of accessibility. Here’s a look at what’s still in the pipeline for 2016.

Options for entering Quebec from the US have always been fairly straightforward, but a new $277 million expansion of Quebec City Jean Lesage International Airport (YQB) will soon streamline arrival and departure experiences for 2 million passengers expected annually by 2018. Between now and then, the airport will be undergoing 26 construction projects such as state-of-the-art curbside and loading zones, dynamic communication and signage systems, check-in kiosks and automated bag drop-off, updated infrastructure and four new gates. Travel through YQB’s main terminal is on the rise, due in part to increased international flights to southern destinations and flights to Canada’s hub cities.

“Despite an economic slowdown felt nationally and internationally [in 2015], YQB achieved respectable growth,” says YQB’s President and CEO Gaetan Gagne. “These results reflect the entrepreneurial spirit that drives us and our primary value, Passenger First®. It’s the reason why we work together to ensure that YQB continues to grow and thrive.”

Separately, construction on a new US preclearance center will reduce connection times to the US, while driving economic development in Greater Québec City and surrounding regions.

The Quebec City Convention Centre struck gold late last year when it received the new sustainability badge of LEED Gold Certification. Of the six environmental certification categories, the center excelled in construction waste management and water and energy consumption, including its recent 73,000-sf addition—part of a recent $36 million expansion of the center—in the mix. Along with teaming up with Rennes Metropole to increase attractability of international conferences and promoting thought leadership with its conference choices and revenue-generating Ambassadors’ Club, the center’s rooftop is welcoming bee colonies in effort to further promote sustainability.

The colonies come courtesy of Alveole, an organization that helps people and organizations install and maintain urban bee colonies. The center will harvest and use the organic honey in numerous ways.

Located in the Plains of Abraham, a green urban sprawl considered to be Quebec’s answer to Central Park, Québec’s Fine Arts Museum, the Musee des beaux-arts du Quebec, (MNBAQ) is gaining a new pavilion this June, helping it become a museum where art, architecture and nature meet. The Pavillon Pierre Lassonde doubles MNBAQ’s gallery space, offering groups larger, sustainable reception areas in an architecturally stunning building. Groups can participate in three days of free festivities beginning on the June 24th grand opening, including cocktail hours and entertainment and an artistic experience on Cartier Avenue and the Grande Allée staged by playwright Alexandre Fecteau.

In the heart of Old Quebec, a UNESCO World Heritage Site, the Basilica Cathedral Notre-Dame de Quebec is offering groups an unprecedented opportunity to walk through the only Holy Door outside of Europe. Pope Francis proclaimed 2016 a Holy Year, prompting the reopening of the world’s seven Holy Doors. Stepping through the threshold of a Holy Door is generally part of a greater spiritual reflection or pilgrimage. As such, groups are encouraged to walk the Pilgrims Garden pathway before entering the cathedral.

Midway between rock climbing and hiking, new via ferrata trails have opened in Canyon Sainte-Anne, just 30 minutes from Quebec. At Projet Vertical, groups are connected to an outdoor cable that allows them to climb the canyon freely across monkey bridges, around waterfalls, natural rock formations and along the Sainte-Anne River. Projet Vertical can customize a session based on your group’s needs. Quebec City Business Destination can also customize and curate experiences that sync with your group’s objective. 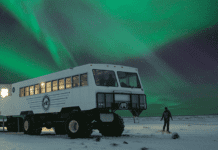 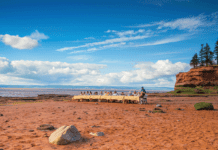 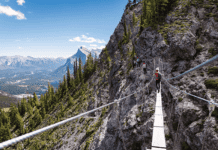