Vice President Mike Pence participated in a roundtable discussion today at Rosen Shingle Creek in Orlando with Gov. Ron DeSantis and hospitality and tourism industry leaders discussing reopening Florida and the economy in general amid the coronavirus pandemic.

“We slowed the spread, flattened the curve, stopped the spread,” said Pence during the roundtable about reopening Florida. “Florida is that state leading the way to open up America.”

Pence’s visit coincided with the partial reopening of Disney Springs from 10 a.m. to 10 p.m. with cast members and guests now required to wear face masks. Temperature checks are also required with anyone with a fever of 100.4 or above not being allowed in.

The opening of Disney Springs follows Universal’s CityWalk that partially reopened to the public on May 14. John Sprouls, the chief administrative officer for Universal Orlando Resort, was part of the roundtable and discussed the partial reopening of CityWalk.

George Kalogridis, president of Walt Disney World Resort, shared with Pence, who seemed surprised that the only time Disney had ever closed before this pandemic was one day for 9-11 and due to a hurricane.

Walt Disney World, Universal Orlando, and SeaWorld have been closed since mid-March.

Interim CEO Marc Swanson of SeaWorld hinted during the roundtable that the park might reopen in June.

Harris Rosen, president and chief operating officer of Rosen Hotels & Resorts, made a passionate plea to the vice president about getting everyone back to work as soon as possible. His idea? Screening. “One, screen everyone who comes into your facility. Then, every single day, screen your employees to make sure they are healthy. It is that simple,” he said. Out of the eight hotels he owns, Rosen has one open, and it screens all associates every day. “Every guest that walks in is also screened. That ain’t complicated,” he added. “If we don’t get people back to work quickly, it is all over. Orlando is suffering. Orlando is struggling. The hospitality industry is in deep depression, but there is hope.”

According to the Orange County Convention Center, approximately 50 conventions have been canceled or rescheduled, resulting in an estimated economic impact of more than a billion dollars. Rosen commented about this. “The second largest convention center in the United States of America cannot have a gathering of more than ten people. We can accommodate 200,000,” said Rosen. He pleaded, “Governor my hope and my prayer when we move into phase two is the convention center will go back to being a convention center so we can get back to business.”

Rosen bought his first hotel in 1974 and today has 7,000 rooms but not a penny of debt. That has allowed him to pay the salaries of all his associates, including those who are not working.

During the roundtable, U.S. Travel Association President and CEO Roger Dow shared the latest data showing that travel-related unemployment in the U.S. is now at 51%—more than double the worst national unemployment rate recorded during the Great Depression (25%).

“It’s a difficult time in every corner of the country, but the pandemic has been particularly dire for the American travel industry, which before the crisis supported 15.8 million jobs and $2.5 trillion in annual economic activity,” Dow said.

Dow’s interaction with Pence touched on the full scope of travel’s economic reach and deep interconnectedness with sectors such as restaurants, retail, and transportation. At the meeting, Dow summarized for Pence the travel industry’s most immediate policy needs, including:

The Future of Meetings 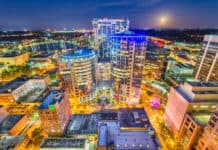