Destinations across the country are focusing on diversity and inclusion more now than ever in an effort to make all attendees feel welcome in their communities.

One city that’s leading the path is Washington, D.C. A collaboration between the Washington DC Economic Partnership, Events DC and Mayor Muriel Bowser showcased the city as the “Capital of Inclusive Innovation” in March at the South by Southwest event in Austin, Texas. The following month, a partnership between Mayor Bowser, Howard University and Clearly Innovative launched the Inclusive Innovation Incubator (In3) — dubbed as the nation’s first affordable co-working incubator focused on diversity and inclusion.

Following Mayor Bowser’s Pathways to Inclusion report, outlined to make D.C. the No. 1 city for technology inclusion, the new In3 space helps support entrepreneurs and businesses in an effort to address the lack of diversity in especially the tech industry. Luma Lab operates the hub’s programming that includes networking events and, as you might have guessed, provides an ideal think-tank space for meetings of up to 100 attendees.

Several other cities are also making waves in bringing diversity to the meetings market. The Philadelphia CVB became the first to establish a Multicultural Affairs Congress, known today as PHLDiversity, in 1987. Explore St. Louis works with the St. Louis Mosaic Project to help the city offer groups a more cultural event in the community. The Las Vegas Convention and Visitors Authority (LVCVA) has also made itself known as a standout destination for the LGBT community, with many resorts investing in training their employees in diversity. 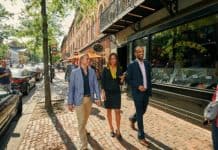