Take note of these new happenings at Walt Disney World, from new health protocols for meetings and events to new resorts, meeting spaces and group experiences.

As part of ongoing steps to help instill confidence for the meetings market, the Walt Disney World Swan and Dolphin Resort is offering a selection of health protocol options, including COVID-19 testing. These optional health protocols build upon initiatives already in place.

The optional health protocols include:

The hotel is also offering the protocols as part of a buyout or a controlled environment event. In the summer of 2020, the resort successfully served as host accommodations for Major League Soccer’s MLS is Back Tournament for six weeks, becoming one of the first professional sports “bubbles.”

Among the guest rooms are two Presidential Suites and 149 additional suites, all with floor-to-ceiling windows, which can accommodate families or groups of 6-8 people, or can be accommodated for executive business meetings. The hotel will offer its own signature restaurant and bar, lobby lounge, grab-and-go market, health club and pool with an elevated deck and fire pit. In addition, groups will have full access to all the amenities at the Walt Disney World Swan and Dolphin, including the Mandara Spa, five pools, 18 restaurants and lounges, preferred tee times at nearby Disney golf courses, plus complimentary transportation to all four theme parks and Disney Springs.

Disney’s Riviera Resort opened this past December, offerings groups a Parisian-style coffee shop, Le Petit Cafe, which turns into a wine bar by night, as well as Primo Piatto serving up breakfast and lunch, and Topolino’s Terrace—Flavors of the Riviera, a signature dining venue with panoramic views of Walt Disney World, and featuring a poolside bar. On the outdoor terrace, groups can take up a game of bocce ball, giant chess, or lawn snooker, or take a dip in the zero-entry pool featuring a 30-ft waterslide.

The guest rooms all feature a refrigerator, microwave and access to laundry. Guest rooms with at least one bedroom include full kitchens and in-room washer and dryers—a good fit for long-stay business guests. And, the 3-bedroom Grand Villas also feature a dining room. The resorts aren’t the only ones releasing something new for 2021, as EPCOT is currently undergoing a transformation. “The Soul of Jazz: An American Adventure” is now open. Attendees visiting the park can enjoy a musical tour of the U.S. as they learn more about this musical genre. This new exhibit features Joe Gardner, the musician, mentor and teacher from “Soul,” as he shares the rich and surprising history of jazz from several influential cities: New Orleans, Chicago, New York City, Los Angeles and San Juan, Puerto Rico.

Guests will also soon be able to use the Play Disney Parks mobile app to interact with the exhibit and test their knowledge of jazz. A NEW Perspective on Meetings and Events! 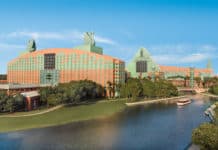